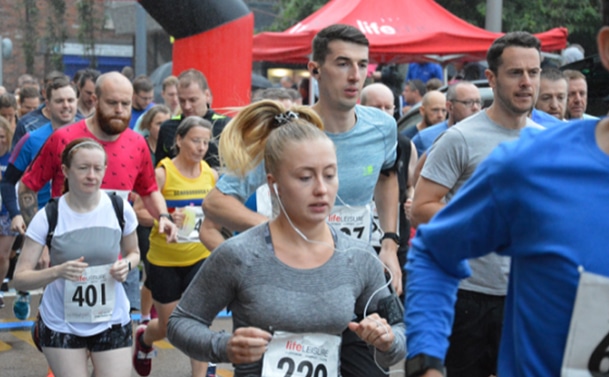 Over six hundred runners took to the streets at the weekend for the Big Stockport Run.

The event, organised by Life Leisure, takes place every year and is attended by club runners, local residents, families and those raising money for good causes. Participants take part in a 10k, 1k or 1mile run around the town centre, with Stockport residents turning out in their masses to support them.

This year was extra special as it included the fun family ‘Frog Dash’, which led children and families on a hunt around decorated frogs, which were installed as part of the Giant Leap Frog Art Trail and will be removed from the town centre at the end of the month.

Sam Barton, Community Sports Officer at Life Leisure and Big Run project lead, said: ”The Big Stockport Run goes from strength to strength every year and this year’s event was no exception. It was fantastic to see such a broad mix of people taking part, from serious racers and competitive clubs, to families and friends out to have fun – often while raising much needed funds for local charities.

“Huge congratulations to everyone who took part. Whether you obtained a PB or it was your first 10k, everyone should be very proud.”

“Stockport’s BIG 10k has got better each year so when Life Leisure suggested we sponsor the family fun run and have our own frog dash, we hopped at the chance!

“The frog dash took the runners around 10 of the 22 art trail frogs with the top three fastest winners awarded their very own gold, silver and bronze frog to take home. All entrants received a Frog Dash certificate. This was another great opportunity for families to be active together and see what a great place Stockport is for everyone to enjoy.”

First to cross the line in the 10K Run Open Male and Female 10K categories were 26-year-old Thomas Bright from Halifax (Vegan Runners UK) and 47-year-old Jennie Pickard from Cheadle Hulme (Stockport Harriers & AC), completing the course in times of 35.48 and 42.51 minutes respectively.

The youngest participant on the day was 15-year-old Jordi Hamblet from Brinnington who completed the 10k course in just over 1h and 14 minutes, while showing there really is no age limit to feeling fit and taking part was Ralph Mills from Leeds, who at 71 was the oldest competitor of the day. Special mentions also go out to 11-year-old Georgie Garside from Cheadle Hulme who was the winner of the 1 mile Fun Run, and to Katie Holmes who suffers from CP and completed the Fun Run raising money for the CP Society.

Local organisations helped make the event run as smoothly as possible, ensuring all racegoers, visitors and supporters had an enjoyable day.